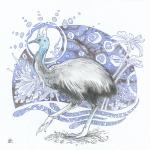 Large and flightless, the cassowary is an icon of Australia and Papua New Guinea. The Rainforest Aboriginal people have a cultural relationship with the birds, revering them in songs, story, and dance, and respectfully hunting them for food. One of the Aboriginal Dreamtime stories tells of how the cassowary got its unique looking casque atop its head.

Long ago, the animals all lived together. They would gather at watering holes to drink, but cassowary was shy to join because he was self-conscious of his small wings and inability to fly. When the other animals saw and taunted him, he charged in a rage, missing his target and instead bashing his head into a large rock, part of which broke and stuck to his head.

That night, the animals were attacked by snakes, and as cassowary ran into to the fray. When the snakes laughed at his flightless wings, he once again flew into a rage, and charged about, scratching at the snakes and smashing them with his stone-topped head, until the snakes were defeated.

After that, the other animals no longer teased him, and he became their protector.

“You might just as well say,” added the March Hare, “that *I like what I get* is the same thing as *I get what I like*!”

“You might just as well say, ” added the Dormouse, who seemed to be talking in his sleep, “that *I breathe when I sleep* is the same thing as *I sleep when I breathe*!” 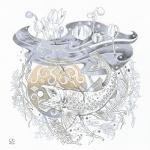 The Japanese name for this fish, Amemasu, means “rain trout”, and they inhabit rivers and lakes of Honshu and Hokkaido. It is said that they are shape-shifters that can take on the form of a beautiful woman. In this alluring form, they seduce young men leading them away to never be seen again. But the glamour can be pierced by touch, for their skin is cold as that of their fish nature. The Ainu know that ancient Amemasu are guardians deities of lakes. These old ones grow so big that they can span the width of an entire lake. 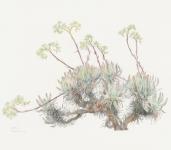 NOTE: Prints of this item are on pre-order and will not ship until Mid-June, 2020.

Original painting is watercolor and gold leaf, in a custom designed wood lasercut frame, and sealed with resin. 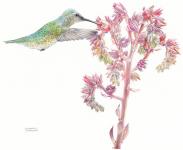 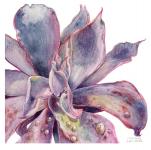 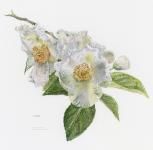 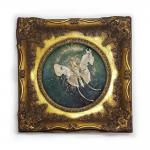 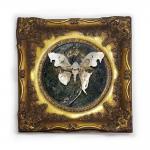 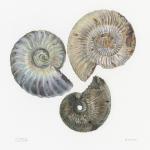 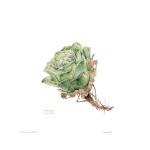 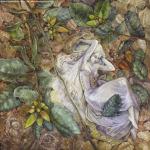 Original painting is sold fully framed. See the Detail photos below for the framed image.

Yexian of the Chinese Cinderella story. 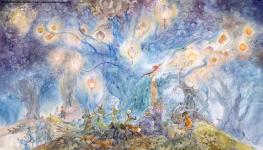 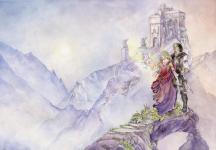 Cover illustration for a book by Catherine Asaro, sequel to "The Charmed Sphere."

The Unicorn is a child of the sea - born of foam and restless waves, surging with the wild abandon of the surf. The Knight of Cups is her companion on the eternal quest.

He is the knight of the Round Table on the grand quest for the Grail. He is the romantic who seeks where his heart and emotions lead. He is the artist and the musician and the poet whose eyes see into the unseen nether-realms of imagination. He is the idealist who will not let physical laws stop him from riding with reckless abandon across the wavetops on his journey.

Delving within for personal discovery and answers, turning away and disengaging from the material for the spiritual, moving on, letting go, weariness, drain.

Seeker of the Seas, dive down, dive deep. Plumb the sapphire waters so dark that they pulse with the nacreous gleam of black pearls. Slice through the waters, O Seeker of Truth; slide with lithe body through the currents and undertows; turn away from the sunlight of the world up above that blinds with its too-sharp brilliance. Like the delicate luminescence of the deep sea life, there are some things which can only be seen when the eyes grow enlarged in the dim netherlit otherworld. Dive down, Seeker of the Seas!

Indulging in fantasies, having too many options to chose from. Too many desires, some within the realm of reality, others...not so much. Unlimited possibilities.

Her head is lost in the clouds. She has stars in her eyes as she looks to the castle in the sky, unaware of their precarious perch. Meanwhile, he is a little more grounded, eyes on the castles that are on the ground and within reach, however obscure the arcane symbols on his map may be.

Being unaware and self-absorbed, isolated and seeking within, disengaged from the world, dreamy, contemplative.

The Knight of Swords is the brave hero who rushes headlong into conflict to defend his beliefs. He is blunt and comes directly to his point. He is domineering, a seeker, slicing through the skies with his sword and his wings. A storm gathers in his wake, borne of the turbulence his winged army creates, and he is lifted high above it all to pierce through the chaos. The sword is a beacon.

He calls out to the night's abyss:
Lift me up spirits of Sky
grant me keen sight of Hawk
swiftness of Sparrow
grant me insight of Raven
brave heartbeat of Hummingbird
bear me up with grace on wings of Swan
guide me with visions of wisdom from Owl

Suffering from anguish, fear, anxiety, guilt, uncertainties in the night.

The funnel of the sky stretches up to the heavens; an ominous tower of storms with but the hope and glimmer of light high above at the eye of turmoil. "Come to me, come with me," the voice of the Stormcrows whispers to him from nearby. "Let me guide you through." With anxious eyes, he gazes upwards, away, oblivious to the proffered guidance through the night of the soul. He clutches sheathed sword close for security, rather than grasping bright blade aloft to light the way!

The Brambles Crone lives among the blackberry hedges where the fruit is tempting and sweet, but even the leaves have wickedly curved thorns to catch and hold. The little hummingbird may flit and navigate with ease among such treacherous tangles, but the noble and grand elegance of the Swan with the arcing spread of her wings is not for such tangled and thorny corridors.

Escaping responsibility, making away with that which is not yours, uncertainty, keeping something to yourself, dishonor, being two-faced.

He hides his face behind a mask, shrouding his true nature, and he smirks in a rather satisfied way that he has managed to steal one of the swords that the Swan Guardian oversees. He thinks the Guardian is oblivious, but she is in fact watching him with one eye. "What have you got there? Shiny bauble! Shiny bright!" the blackbirds demand, drawn to the sullen gleam. He turns his back to them as well; for he is the cleverest Blackbird to have been able to draw this Sword from the Stone.

Denial, blocking off emotions, avoidance of and not seeing the truth, stalemate, impasse.

The Fishes. Visionaries and dreamers, subsumed self sometimes in the care of others. Spiritual seekers, looking for the answers to the mysteries of life.

The Scorpion. An intense personality, and this focus carries to everything they do, whether for benefit or detriment.

The Ram. Impulsive, takes the initiative, and determined. The sparking flame of assertiveness. 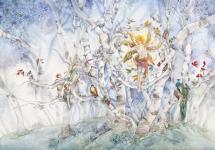 From fallow field and verdant vale,
from sun-bleached shores with diamond grains,