Limited Editions are printed in large format - sizes vary depending on prints.
Lithograph prints are on archival heavy stock and limited to 1000. 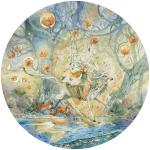 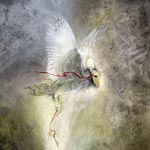 Dreamsign -- the elusive anomaly that a dreamer can learn to use to gain lucidity. It is a moment when clarity pierces the fog. Ironically it is often in the form of the nonsensical and out-of-place. Suddenly the fabrications of the mind become apparent as such. Exhilaration and control take the place of fear, anxiety, or confusion, and perhaps carry over in some small measure to the waking. Muhru is dreamsign. The sound of his wings beat like a pulse through all dreams, and he is the guardian of the thin line the separates the knowing from the unknowing. 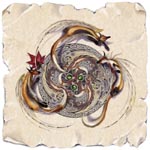 Celtic knotwork with foxes and birds.

Celtic knotwork with cats and fish. 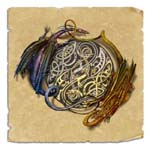 Inspired by the short story Green Serpent by Marie-Catherine D'Aulnoy, a 17th century version of the old Psyche and Eros tale. However, Eros is replaced with a man cursed with the form of a green serpent. The curse is his penance for slighting a goddess. The following is an excerpt from the part when the princess (Psyche-role) first comes to the prince/serpent's palace on his island. She was taken there by a magic ship, but midway to her destination, there was a storm. "Completely at the mercy of the winds, the vessel drifted on until it struck a rock and immediately shattered into pieces. The poor princess realized that mere philosophizing would not save her in such a catastrophe, and she grabbed onto some pieces of the wreck, so she thought, for she felt herself buoyed in the water and fortunately reached the shore, coming to rest at the foot of a towering boulder. Alas, she was horrified to discover that her savior was none other than the green serpent!"

"...The fox leapt off the bed in a blur of motion. She whipped her tail around, and between one blink of the eye and the next, it was no longer a russet fox that crouched on the floor, but a woman-goddess fierce to gaze upon. She stood slowly, gracefully. Now, the Emperor had seen carvings and paintings of Liri, as I am sure you have. Sometimes she is depicted as an innocuous little fox. At other times she is a warrior of fiery hair and will. And then there is her third form - Liri of the Wood. In this form she is all that is wild. She is hidden desire whether it be passion for love or passion to kill. She is a Trickster, a Scholar, a Musician, and a Lover...."

Twisting, twined, and tangled, tumbling towards the yearning sky
Like lovers locked in long embrace; their leaves drawn rustling sighs
A hundred thousand years have marked their journey on the rings
that spiral out from mingled heartwood in the song that mem'ry sings.